Nothing could have prepared me for this. Literally two weeks ago, life was fairly normal. Now? I’ve spent the last three days with my husband at chemo. It’s been 6 days since we found out. Six days since I’ve known. Six days since our entire lives have changed.

Coming to the Cancer Center is less than pleasant for me. The anxiety and flashbacks from my own chemo hits me every single time I come in. Today I started bawling when we got into Brad’s infusion room.

I was very adamant that I would never be back here when I had my last dose of chemo. With my survival rate, I’ve said that I will NOT take chemo ever again. I just want to live. Now, I don’t really have a choice.

Our story is just so tragic. I’m scared and lost, I feel lonely and exhausted. I’m sad for the person I was during chemo for my kids and husband. I’m sad for our parents who are mourning so much. But there is nothing compared to the grief I feel for my children. There are no words. Not a single one.

There are no words to describe the guilt. How can I even be talking about me?!

There aren’t any deep breaths that take away the pain. This grip on my heart is just fucking awful.

I’d way rather be the patient than the caregiver.

Today I had an outstanding result on my echocardiogram. I’m thankful my healthcare provider understands the swiftness needed of my own positive results.

Brad is resting in a quiet house while Grandma and Grandpa have the kids at hockey. I haven’t had a quiet house for awhile. Today marks his third day of chemotherapy in a row. Tomorrow another MRI and Friday is his port placement. We will be port scar twins. Fucking great, right?

Brad isn’t up out of bed much, and tries to nap away the pain when he can.

Looking forward to the end of the weekend when he might be feeling better.

Brad starts chemotherapy on Monday. He will have it for three days. 5 hours the first day, two hours on Tuesday and Wednesday. Thursday an MRI, then Friday will be port placement.

So very similar to mine. I honestly have terrible flashbacks of all of this. My first round of chemo was without a port, and it was all day. 6 hours if I remember correctly.

I’m so very thankful that Brad’s mom and dad are here to help with some of this. I don’t know how I would feel sitting there for 5 hours again. Watching this man take the poison that I had to take. At the time, I thought I was strengthening the odds that him or my children would never have to endure something so awful. It really is the most terrible thing ever.

Brad hasn’t been able to move much. He is still healing from his biopsies, and any movement creates bleeding and really severe pain and spasms.

We are so thankful for all of our friends and family who have reached out and helped. Please know that we love you, and I’m sorry I haven’t taken time to say thank you. I would if I had time.

Pray for Brad. Pray for my kids. Please bring us peace. 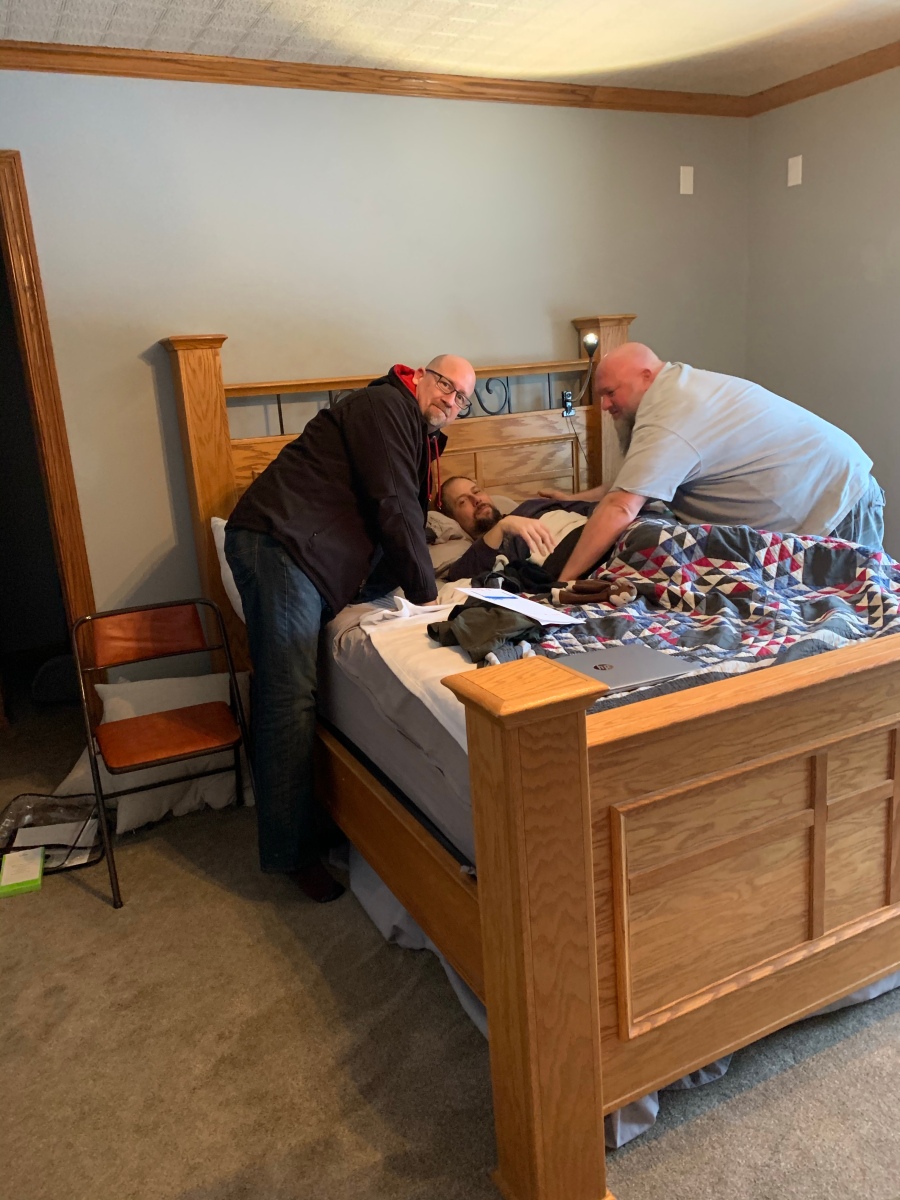 I had written this entry a few days ago…

Today we learned a little more about Brad’s diagnosis. We had to keep reminding the staff that we are familiar with how chemo works and what it does, etc., since he is doctoring at Coborn Cancer Center, just like me. 🙄

Brad, my husband, the father of my littles, the daddy to all three has stage IV small cell carcinoma.

Brad had a clear MRI in October. That is so fucked-up that in the span of a few months, we have watched this man become sicker and sicker. He was being treated for prostatitis, since his abdomiMRI was clear.

This form of cancer is very, very rare. If you want statistics, google it, but please respect that we are not googling. We don’t want to know how other people responded to treatments, all that matters is Brad.

We aren’t telling our kids that he has stage IV. At this point, we hope to spend all of our time focusing on family and friends. 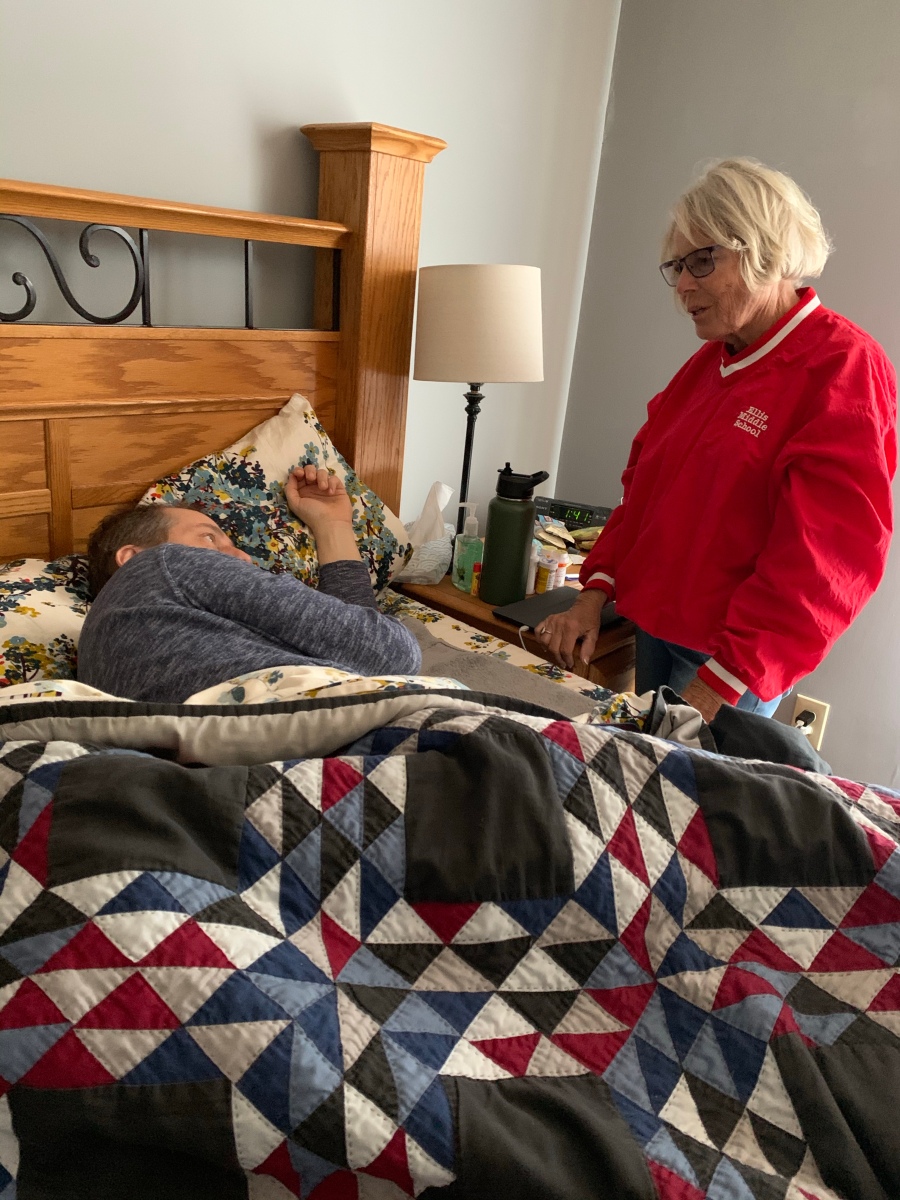 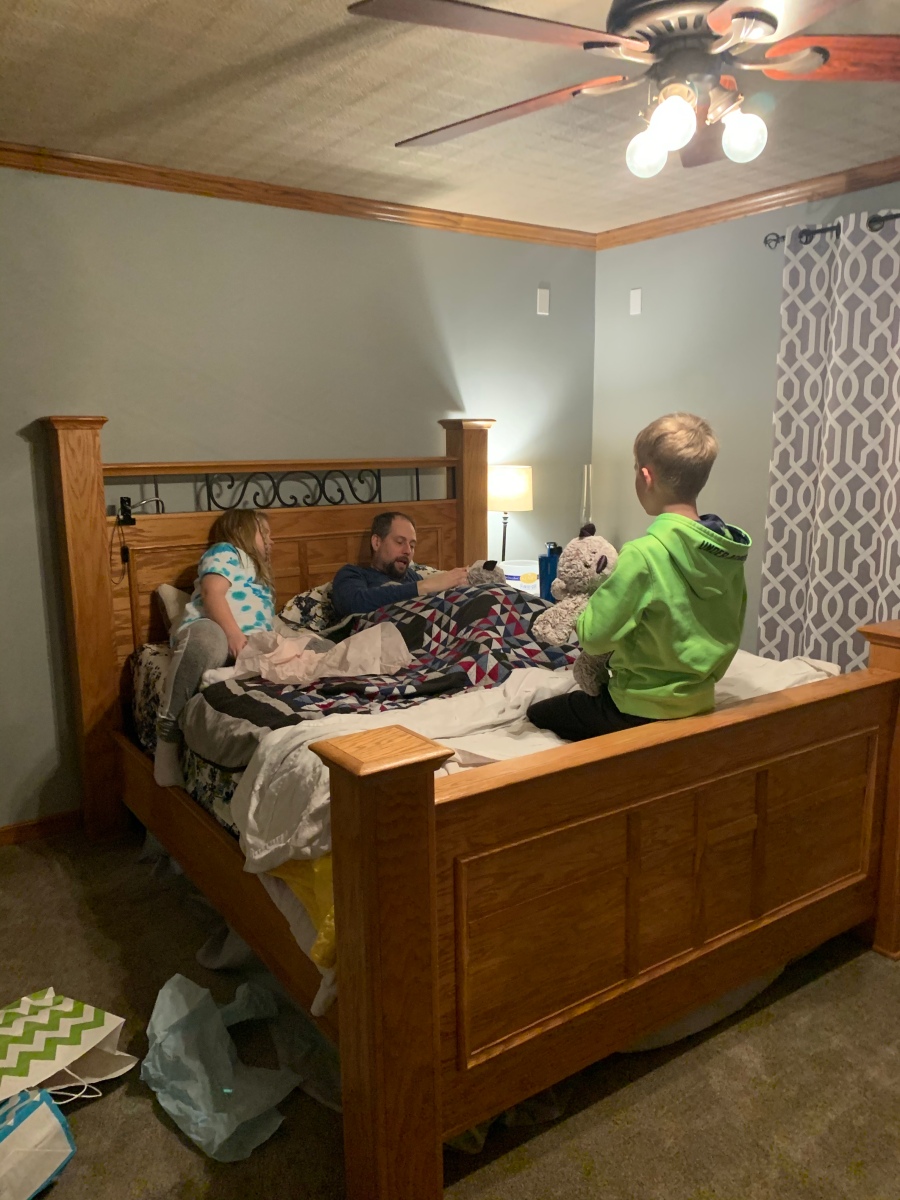 Today I had to tell my kids that their dad has cancer.  I had to watch my husband feel all the things I never wanted him to have to feel.
I remember those feelings, knowing something was growing inside me that was trying to kill me.  Knowing that whatever it was, it had been squirming around like a dirty sewer rat, sullying everything it touched.

fuck.  I don’t have any words.  None.  My heart is broken.  my family is hurting.  it has to be the most painful thing I’ve ever felt.

Brad gave both littles a teddy bear that he inscribed.  Filled them up with hugs and love for the kids. Giving them something to squeeze when they need some extra love. It broke my heart even more.

This can’t possibly hurt any more than it already does.  Nothing can.  Nothing. Ever. 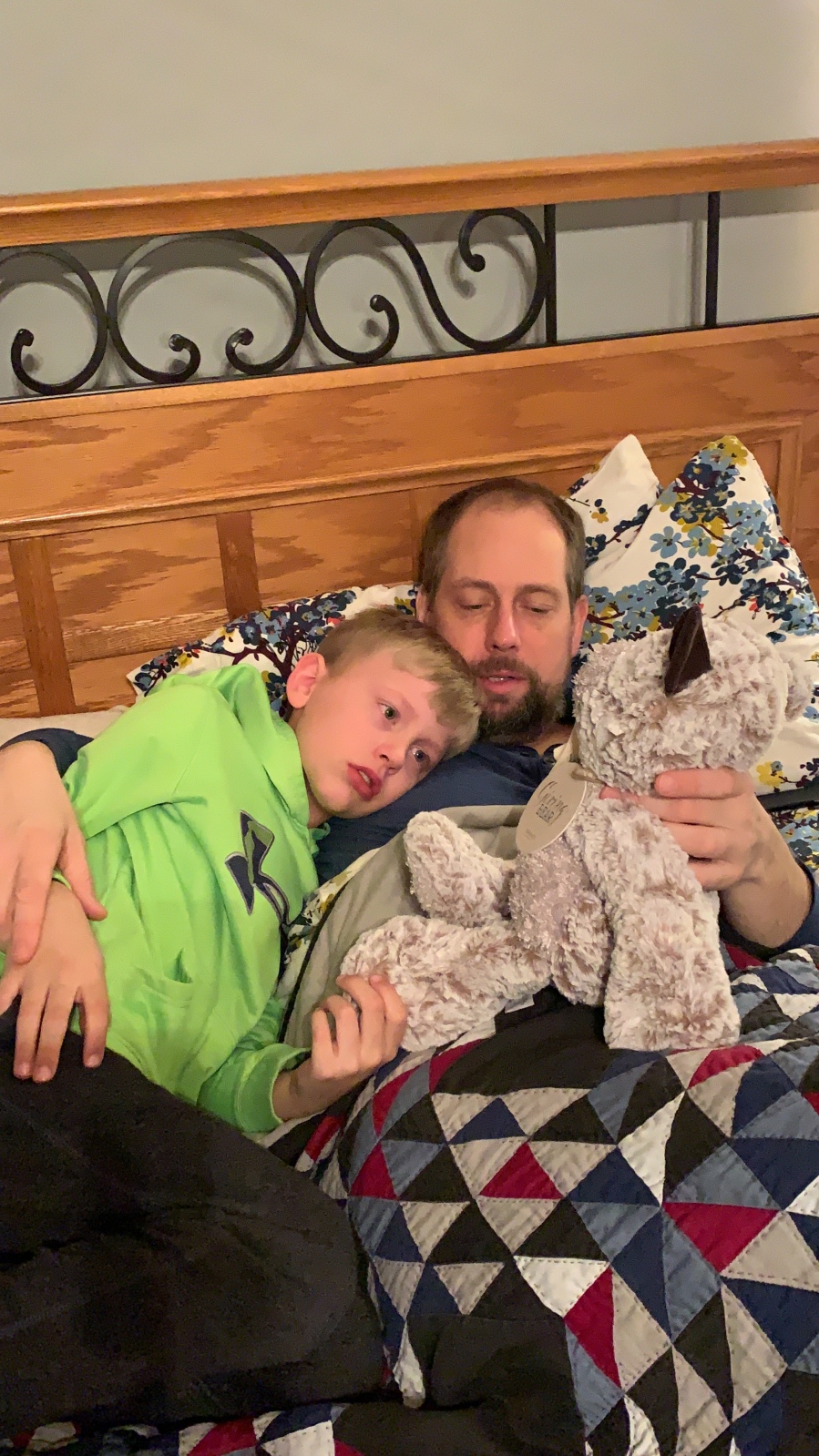 I took a couple of pictures with my kids this morning.

Yesterday, I slept my last night.

Yesterday was the last day my kids had. Before we knew.

Today their lives will change forever.

There’s nothing in the world that could have prepared us for today.

Brad has cancer. They call it small cell carcinoma. It’s an evil fucker. Gets you good when it finds you.

We don’t have very many answers right now, and we hope to soon.

Please pray for my kids. Pray that they will have faith and strength. Pray for Brad. Pray for his doctors and his comfort. 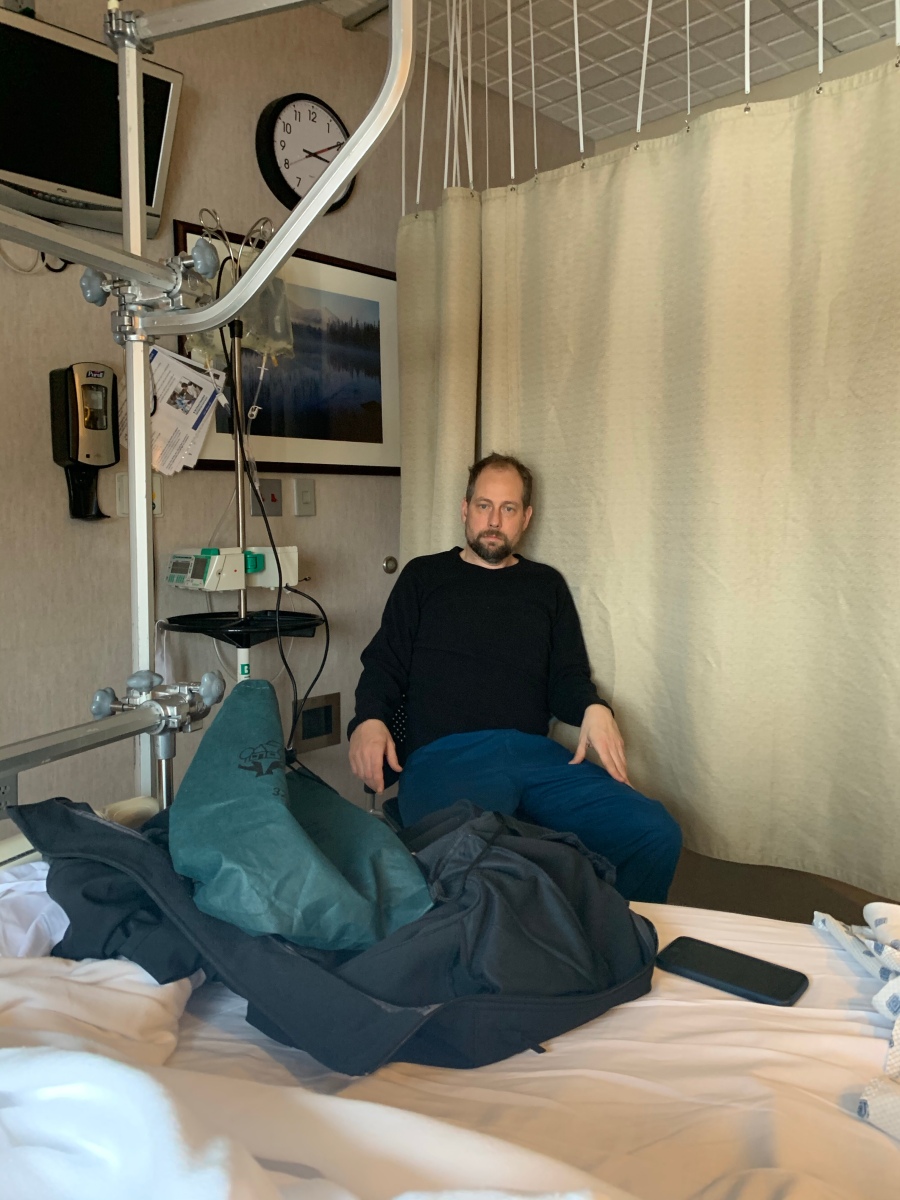 There’s this thing that happens after cancer in regards to odds. I kind of feel like I’ve paid my dues. Like I’m good for awhile, right?

After a questionable season of health BS, My status is currently up in the air pending more specialty appointments.

However, this time, it’s not about me.

For about six months, Brad has been sick. And now, after months and months of doctoring, tomorrow he will have a biopsy and some cultures to find the culprit of his ailments.

Brad has been doctoring with his own specialists and his story has been a little bit more private than mine. I’m a loudmouth like that, I guess.    .. I’m ok with it. Balance, right?

Brad hasn’t left the house for a long time. Well, except for his grandmother’s funeral. And sometimes, hockey. Most recently, he hasn’t gotten out of bed for about a week. I bring him meals that he can’t eat, and I feel like I’m watching him waste away. He’s lost about 30 pounds in three months. I’m single-parenting the hell out of life and it’s so hard. Then snow-mageddon this weekend. I’ve cleared so much snow this winter I want to scream.

Tonight, while I was bringing the littles to hockey, Brad had a co-worker stop by with some meals and snacks for after surgery. ❤️ I honestly think they are the only people that have known he was sick , simply because he has had to take time off of work.

I’m quickly learning that I’m not as patient as he was as a caregiver. And that life has completely changed for my children. Again. I can’t even begin to talk about all the feelings I’m having. It sounds pretty selfish, really.

I’m feeling so damn angry, and I’m not sure at what.

Tomorrow. Send a little prayer up if your the praying kind. We might need it. 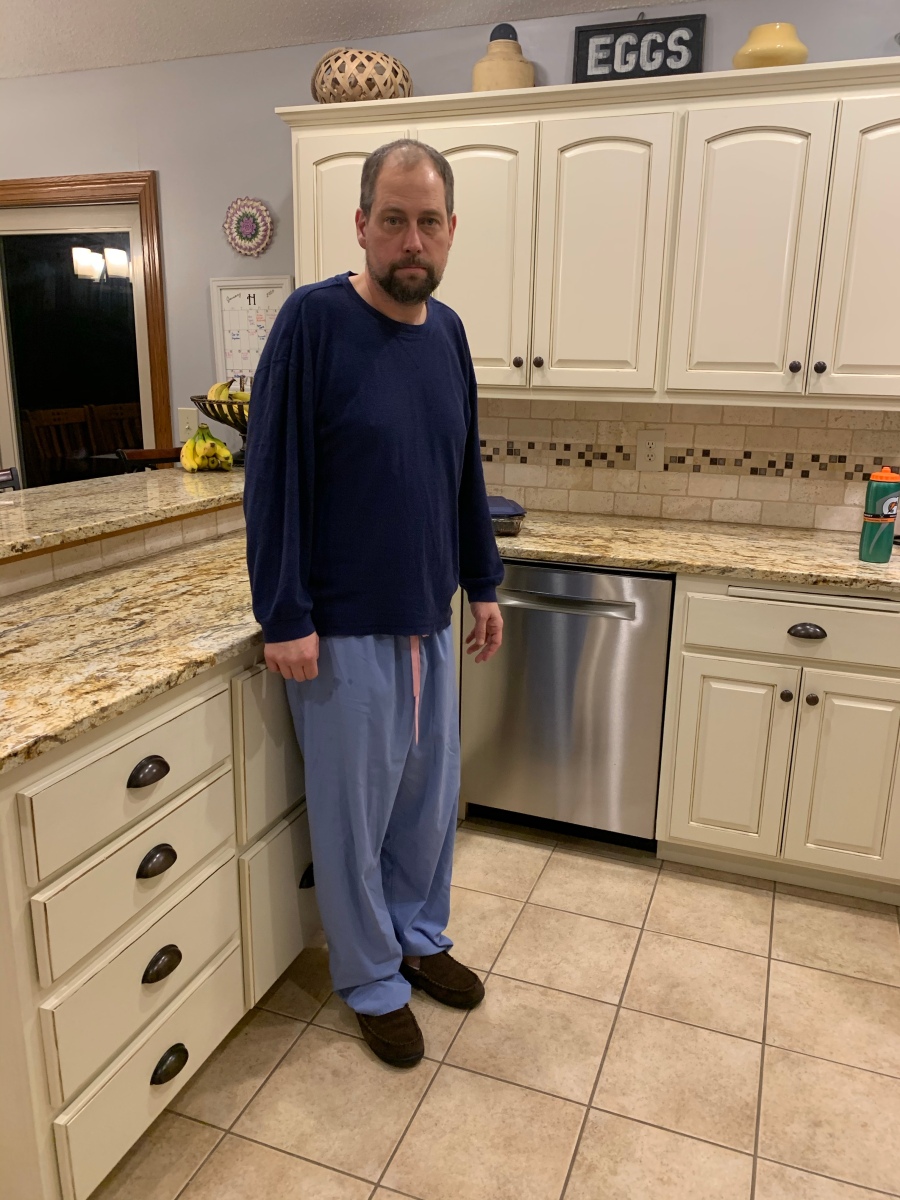 Today is the day I got my ears! My first appointment of the day was at ENT early. The wonderful person tried them in my ears and I took them for a spin. The first thing I noticed is that my hair sounds really loud when moving over a microphone. The next thing I noticed was footsteps. And gossip.

There is something to be said about listening to music and really hearing how shitty you sound singing to it. It’s honestly kind of amazing.

I had a few more tests today and I’ll have a bunch more next Friday, still trying to figure out some of the stuff that the last round of tests discovered.

This week, I’ll enjoy the multi-thousand dollar hearing devices. The best part about them (aside from hearing, duh)???? I can stream music right into the device and tune out anytime I want to. I’m sure that will go over well with my loved ones.

Enjoy my first selfie with ears: